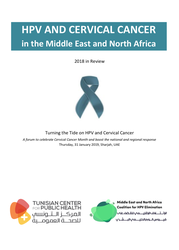 Cervical cancer, caused by the human papillomavirus (HPV), is a leading cause of cancer deaths in women worldwide, including many countries within the Middle East and North Africa (MENA) region. Since 2009, the WHO has recommended that the HPV vaccine be included in national immunisation programs and considers it a ‘best buy’ to manage cancer.1​ ​However, only three countries in the MENA region have included the HPV vaccine in their national immunisation programs, the UAE, Libya and Israel. With at least 7,600 deaths from cervical cancer in 2018, and over 15,000 deaths predicted for 2040 in the MENA region2​ alone, there is an urgent need to increase political will and fight stigma and misinformation around HPV and cervical cancer.

The Tunisian Center for Public Health (TunCPH) supports regional and global efforts to address the burden of HPV and cervical cancer and prevent future deaths. Tackling these diseases in a comprehensive way requires collaborative action by leaders across sectors. That is why the Tunisian Center for Public Health has created the MENA Coalition for HPV Elimination, an initiative that brings together a network of academic, medical, government, media and civil society stakeholders to step up the fight against HPV and cervical cancer in the Middle East and North Africa region.

This regional forum, ​Turning the Tide on HPV and Cervical Cancer​, is a unique opportunity for representatives across the UAE, the MENA region and the world to come together to strengthen the movement to scale up HPV and cervical cancer prevention. Leaders convening in Sharjah will build knowledge and highlight the progress that has been made in the region thus far. This report outlines key steps that have been taken to prevent future cases of HPV and cervical cancer, new data released on the burden of disease and the global context of HPV and cervical cancer advocacy. It concludes by looking forward to opportunities for progress in 2019.

We need your personal information before you download the report.